3D modelling of the Solar System in real time 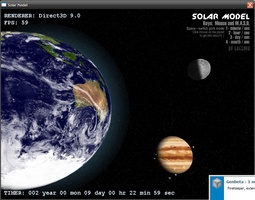 Advertisement
Solar Model 3D is a 3D modelling system that simulates the movement of all the celestial bodies that make up the solar system. The textures used accurately recreate the surfaces of the different planets and their moons.

The bottom section shows the equivalent movement of the planets in real-time.

The space bar displays the mouse pointer. Click on the celestial bodies to show its characteristics. The arrows allow you to move through the universe.
Reviewed by Álvaro Toledo Translated by Andrew Lamont
Advertisement

Why is this app published on Uptodown?
(More information)

is this based on original facts from NASA?

Mendeley Desktop
Manage and organize your research and references
GeoGebra
Tool for studying algebra, geometry, and calculus
RosarioSIS
Calibre
An eBook manager with several features
Joplin
Easily take notes on your PC
Freeplane
Design mind maps with all kinds of possibilities
Everyone Piano
Turn your keyboard into a virtual piano
Wordweb
Complete dictionary of English terms